Marketing is a battle for the mind - coke vs pepsi 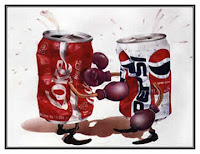 The Times reported a few years ago 'A preference for the taste of Coca-Cola or Pepsi lies in the mind as much as on the tongue. Scientists have discovered that when people know which of the two brands they are drinking, their brains respond differently to when they taste the drinks “blind”.

The findings, the result of brain-scanning technology, show how easily cultural influences can affect perceptions that most people think are created by their senses alone. They demonstrate in stark neurological terms the way in which brand images and aggressive marketing sway choices made by the brain.

On this measure, Coca-Cola appears to be doing a better job: the study found a characteristic pattern of brain activity in volunteers who knew they were drinking Coke, but nothing comparable for those who knew their fizzy drink was Pepsi. '

RELEVANT LINKS
Full Times article online
It's All In The Head - Guardian
Brand Failures - excerpt from the book
Exceeding Customer Expectations- a a seven-point plan (article from Customer Management magazine)
Posted by Unknown at 07:31