Here's an interview with Rob Brown - Rob B interviewing Robert C - asking my opinion on how banks could do better.

or view the article at Rob's site Business Building for Bankers

In this interview, you’ll discover:

Rob Brown says "Robert's valuable insights will help you recognise that there is a huge amount of untapped potential in the small-medium business sector and show you how to make the most of these available opportunities." 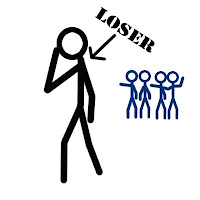 In the new era of social networking, is Twitter really for losers? Or a way forward for business marketing? Robert Craven explores the “Twitter revolution” and whether its benefits reach out to the world of business.

A recent blog of mine about social networking got the comment “only fools don’t get the Twitter revolution”.

Ten minutes later someone sent me the inflammatory “Twitter is for losers” comment. So, what’s going on? Is Twitter a licence to print money? Clearly not.

Some people make money from talking about it; some people claim to make money by using it; some people just enjoy using it. It appears that the majority of traffic is not dissimilar to the Facebook noise, only shorter and more regular. Plenty of people seem to tweet their followers several times a day. (“Who cares?” I hear you say.)

Facebook and Twitter are known as social networking where the emphasis is on the social bit. I have no problem with that.

There is no shortage of media to make contact (websites, blogs, Facebook, LinkedIn, Twitter, networking meetings) and Twitter is simply another way. Some people love it because it is instant, quick and easy. And some people hate it because it is banal, shallow and simply noise.The answer is somewhere in the middle.

Nothing will ever replace the intimacy and contact of a face-to-face meeting. Twitter does let you into other people’s worlds if you wish to follow them.

Some people are great to follow and some are dreadful. 20 minutes of following various Tweets is like 20 minutes in the world of Google – you find all kinds of fascinating stuff, and the not so fascinating.

So how do we put together the business case for using or not using Twitter? Like any marketing activity, the key to deciding if its worth it is in the measurement.

Marketing is all about creating a compelling offer, deciding who you are trying to attract and finding the best ways to reach those people and sell your product. It is easy to be busy or active; it is much harder to actually make sales.

At its simplest level, the measure of any marketing device is the average cost (in time and money) to attract one new customer. For the sake of this discussion let’s go for this brutal ‘Return on Investment’ criterion.

So now for the GCSE-type Maths

Question: If Jeremy spends, say, half an hour a day twittering and his time is valued at £40 per hour... And he gets one new client every month from this Twitter activity, then how much does it cost to acquire one new client (via Twitter).

Answer: He has spent 2½ hours per week twittering; he gets one new client every four weeks. It costs Jeremy £400 in time to win one new client (excluding any other costs).

Jeremy should then compare this cost of customer acquisition against all other means.

The reality is that it is harder to measure the effectiveness than in our crude example.

However, the principle stands. Before you go mad on Twitter ask yourself the following:
• Who is your target customer?
• What is the best way to reach them?
• How much time and money on average would it cost to acquire one new customer?
• What is the most effective way of reaching these people?
• Is it word-of-mouth, networking, exhibition stands, direct mail, PR, telesales or any of the other ‘channels to market’?

Yes, Twitter is today’s new marketing device but does it actually work?

FACT: Lots of people do it and they believe it is doing them good.
FACT: Some people seem to actually be benefiting in terms of ROI.

Question: Is it right for you? Will it help you grow your business?

Answer: If someone can show you why you should be doing it then you should sign up. Do you hear clients or prospects asking you to get a Twitter account ASAP (or rather only a few Twitter fans)?

Question: Do the Twitter conversations strengthen a relationship any more than a decent blog/website or actually talking to people?

Answer: Maybe I am old fashioned but I do not wish to confuse activity with business.

A focused Twitter account may be good for regular updates in products/services with more than one field, for example in training. Twitter could then be used to communicate updates if that’s what your target audience wants (or you could just use email!).

Playing the devil’s advocate, if the medical evidence of the effectiveness of a heart op was as vague and non-specific as the business case for Twitter, then I don't think I'd sign up for it.

Twitter will help you find people to listen to and talk to. Are they the right people for you? Is Twitter just another case of the emperor’s new clothes? Twitter me at twitter.com/robert_craven! The business sales will determine it for me.

PS You might want to guess the date of the original article...

Boiling Frogs - not just the one interpretation! 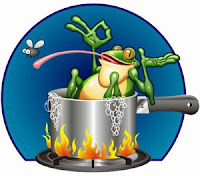 Boiling frogs - my interpretation has always been that frogs die in water that slowly heats up because they don't notice the imperceptible changes in their environment... then BANG ... they explode!
Richardson, who uses the analogy of frogs and tadpoles, provides an interesting, alternative method of classifying reasons for failure.
Boiled frog failures
These are long-established organisations that exhibit the often-observed organisational characteristics of introversion and inertia in the presence of change. This category can be illustrated by the problems faced by ICI.
Drowned frog failures
Less to do with management complacency and more to do with managerial ambition and hyperactivity. In the smaller company context, this is the failed ambitious entrepreneur; in the bigger context this is the failed conglomerate kingmaker, perhaps typified by Robert Maxwell.
Bullfrogs
Expensive show-offs who need to adorn themselves with the trappings of success. The bullfrog exists on a continuum from the ‘small firm flash’ to the ‘money messing megalomaniac’. The behaviour of bullfrogs often raises ethical issues due to a failure to separate business expenditure from personal expenditure (for example, Conrad Black).
Tadpoles
Tadpoles never develop into frogs and represent the failed business start-up in the small business setting. Small tadpoles usually fail to become frogs because of over-optimism, a failure to make contingency plans and a lack of interest in overall success as a result of too much focus on the product.
Posted by Unknown at 12:44 3 comments: