Getting Gold Star Service For A Bronze Price - little things... 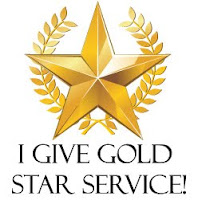 Thursday 09:00:
see the computer I want on the Misco website and phone up to get a RAM upgrade added to the pack.

“No problem” the man says, "but it will take up to three days to be fitted and tested what with the weekend on the way etc”. Fair enough I say to myself.

The next discussion is about delivery. Do I want ‘standard’ which is 4-5 days or ‘super express’ for the extra ten pounds? Not being in a rush I was happy to wait the extra few days.

“Fine” says Andy, “in which case your computer should be with you in 8 working days, maybe less, maybe more”.

I hand over my credit card details and pop a note in my diary to chase up the machine if it hasn’t arrived in the next fortnight. Because I am a past customer they have all the correct delivery details already. Excellent. It is now 10.00am.

Friday 08:45:
The doorbell rings and there’s the postman standing there with my new computer in his hands!

How did that happen? It is a tad under 23 hours since I put the phone down in which time they have found the obscure Toshiba model I had ordered, fitted and tested the extra RAM, reboxed it and sent it off so that it was with me for breakfast the next day.

Talk about under-promise and over-deliver. Talk about exceeding customer expectations. Talk about blowing the customer away. So, Misco, to quote Eminem, “I’m your biggest fan!”
Posted by Unknown at 10:24

They offered Gold and Silver. Many offer more (eg Amazon)

In a nutshell:
They made a promise. They over-delivered. You were delighted.

Did you feel that they were unprofessional or confusing, or were you just delighted to get your package early?

I didn't think so.

Did they lose revenue potential?
Quite the reverse. They have created a potential client for life.

Where will you go for your next computer?
How many people have you told about them?

Clever old Misco - I had forgotten about them. They will be back on my radar.

I assume you have no other connection with them.

UPGRADES make us feel good and are excellent for word of mouth:
- Recently got upgrade by BA.
- Restaurant gave me free brandy at end of meal.
- Camera got repaired despite being outside guarantee. London Camera Exchange

UNDERDELIVERY drive us wild and we tell everyone:
- local council refuse to answer my calls. Plymouth
- shop refuses to acknowledge that my new tripod had a piece missing. Jessops
- fitness centre has me on 12 month recurring contract so I have to pay remaining 11 months when I cancel.

"Under-promise/Over-deliver" is easier said than done.

While we all believe it is a good thing I wonder how one can consistently and constantly do this.

You create ever higher expectations and cannot always give an extra 5%.

As a web agency or a restaurant or cinema or a widget manufacturer, how can you consistently over-deliver?

As a one-off you can do it. But as a business strategy?

Yes - if we push ourselves to always exceed the normal then we can keep on exciting our customers. IMHO.
No easy task but I am sure that it is possible.

The trouble comes when the curve of improvement slows down or starts going backwards in the eyes of the customer.

For instance, eg Starbucks no longer excites us as it has become the normal. Maybe that is the chalenge - to keep re-inventing yourself.

I am not sure if you need to re-invent yourself entirely (like Madonna or Kylie). Not sure if I want my accountant to constantly do that.

However, I do want my accountant to be pro-active, to surprise me, to add real value, to go the extra mile. This is not about gimmicks .

We all hate being taken for granted.

Customer Service is the name of the game! Wasn't that your 'thang' Robert?

Be intersting to see if Misco pick up on this. My first intro to RC was 'Customer is King' book/stuff - he did a workshop in a dark, dank basement.

Yep - I wrote 'Customer Is King' in 2002. Foreword by Sir Richard Branson.
You can still get it via the website www.directorscentre.com It continues to sell slowly but surely; the ideas are still just as sound but some of the technology has moved on (tripadvisor, twitter etc)

So, RC, you ordered a brand name PC that the vendor stated they had in stock, and were offering for sale.

You then wanted to add another item, namely some RAM, (a fairly standardised item which plugs in either under the keyboard or under a panel on the base of most notebooks, even easier on desktops).

The representative advised you that "the computer should be with you in 8 working days, maybe less, maybe more”.

The service you mention had an item to sell, and had to locate a standard part for said item to add on. They seemingly had no idea whether the RAM was in stock or not, hence the odd 'estimation' of the delivery time.

They then miraculously discovered the part, plugged it in, and shipped it to you, with admittedly good speed.

I don't doubt your happiness at receiving it the next day, and I agree that the service was as it should be, but the outcome, based upon the way the company handles it's stock knowledge, and the way it tried to charge for that which it delivered anyway, could have been much different.

What baffles me, aside from all of the variables you had not mentioned, (such as whether it was the shipping company that actually did the express work for standard fees, or whether Mr. Jones' delivery was delayed because you are RC and Misco knows, it etc,) is that for you and a couple of equally giddy commenters herein, gold service doesn't seem to lie where there is solid merit, but where there is nothing left to take out.

Aside from the initial order, which left you wondering and unable to plan accordingly, you received the 'right service.' Gold would surely have been where they were able to iterate the stock levels and specific delivery date.

Maybe the posting is a sign of how little I now expect from most suppliers.

I was happy that they had 'over-delivered' (although you are right that they they did under-promise in most senses).

The delivery brought a smile to my face because it was unexpectedly early. I am a simple soul.

It is all too rare for 'mainstream' service to be anything more than mediocre. This was a small light...

Your sentiments are understandable. What a shame that there are so few experiences as your recent encounter with Misco.

I'm still not sure as to the award being premature. Perhaps "Bright Marketing's Gold Star of the Week" would have been more appropriate, without the benefit of longtitudinal results?

Otherwise, aren't you in essence reducing the potential value of your gold star award?

I am sure Robert will agree.

So
your club will be another example of under-promise/over-deliver we hope.

It sounds odd to agree with your sentiment, Jerry, as the 'under-promise' part sometimes sounds like you under-value what you are doing. But yes, the intention is to keep adding value to the offer ie you get more than you paid for.

Be intersting to see if Misco pick up on this. My first intro to RC was 'Customer is King' book/stuff - he did a workshop in a dark, dank basement.

I am not sure if you need to re-invent yourself entirely (like Madonna or Kylie). Not sure if I want my accountant to constantly do that.

However, I do want my accountant to be pro-active, to surprise me, to add real value, to go the extra mile. This is not about gimmicks .

We all hate being taken for granted.